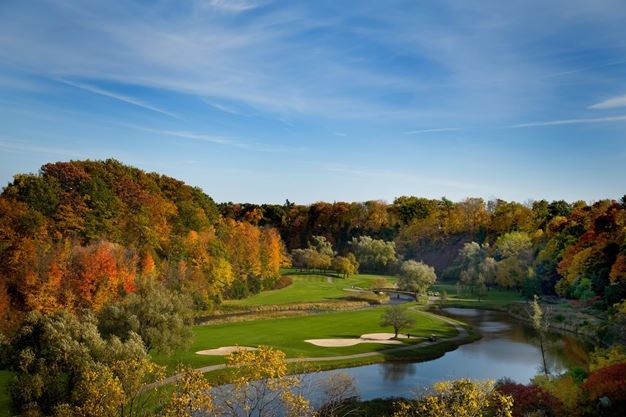 Is Glen Abbey Golf Course a structure or a landscape?

While the question may seem unimportant the answer could determine whether the facility remains intact or faces the bulldozer.

This distinction is one of the crucial arguments being discussed this week in Toronto Superior Court at Osgoode Hall, where lawyers from the Town of Oakville and ClubLink, owner of Glen Abbey Golf Course, face off over the property’s future.

ClubLink is hoping to build 3,222 residential units at the site, including nine apartment buildings between nine and 12 storeys.

“There is no dispute ClubLink did not exercise their right to object because they didn’t like the process that would flow from that objection.” stated Sandra Barton, lawyer representing Town of OakvilleClubLink also wants to build 69,000 square feet of commercial/retail space and 107,000 square feet of office space at the site.

On Sept. 25, 2017 ClubLink announced that it had filed an application to demolish the site (with the exception of the Raydor Estate and Stables).

In response, the town of Oakville took steps to protect Glen Abbey on Dec. 20, 2017, with Oakville council voting unanimously to designate Glen Abbey Golf Course a property of cultural heritage value or interest under the Ontario Heritage Act.

While the town has rejected both ClubLink’s development application and its demolition request, the matter has been appealed.

The town is hoping the Superior Court hearing will determine its rights and jurisdiction with regard to the golf course under the Ontario Heritage Act.

ClubLink is hoping for an outcome, which will allow it to move ahead with its project.

On Monday, July 16 town of Oakville lawyers Jennifer King, Sandra Barton and Rod Northey argued ClubLink’s application to demolish the golf course is flawed because the section of the Ontario Heritage Act they applied under deals with buildings or structures.

“They are alleging what they want to remove or demolish is a building or structure, but they include in that the entire golf course and in order to make that claim they need to say that is a structure,” said Northey.

“The town’s response is when you look at the overall framework internationally, provincially through the town’s actions from the past several years is that the golf course is a landscape and while the landscape includes structures, it is bigger and thus you can’t apply to remove a golf course as a whole under section 34 (of the Ontario Heritage Act).”

During the day’s proceedings town lawyers again rejected arguments made by ClubLink that the town had thrown legislature together at the last minute to block their proposed development.

Barton noted that in 2013, before there was any talk of developing Glen Abbey Golf Course, the town recognized the need to develop a strategy to preserve local cultural heritage landscapes.

As time went by the town whittled this list down to eight properties deemed high priorities for eventual designation under the Ontario Heritage Act.

Barton presented evidence that ClubLink was aware of these moves and claims that rather than the town rushing to prevent the development, it was ClubLink that accelerated its plans once it became aware of what direction the town was taking.

She pointed to an article about ClubLink’s plans to redevelop the property in which ClubLink CEO Rai Sahi talks about the reason behind the decision.

“What we are doing is … protecting the zoning,” Sahi is quoted as saying.

She noted that following Glen Abbey Golf Course’s designation under the Ontario Heritage Act ClubLink had 30 days to appeal the matter to the province’s Conservation Review Board.

She said ClubLink did not choose that route.

ClubLink officials said they did not appeal to the review board because its decisions are not binding on the Town of Oakville.

“There is no dispute ClubLink did not exercise their right to object because they didn’t like the process that would flow from that objection,” said Barton.

“They see this as a way of getting around that process.”

During the hearing Justice Edward Morgan asked about how — if ClubLink lost its appeals — they would be required to seek approval to renovate the golf course or introduce new designs.

He voiced concerns the Ontario Heritage Act would require them to maintain an antiquated golf course.

King noted the act only requires ClubLink to get consent from the town if they plan to make changes that would impact the property’s heritage attributes.

ClubLink is expected to present its case Tuesday, July 17.

Are you thinking about moving in the next year or two? Contact Stephen McDermott today and learn what it is like to work with a true professional.